This past December, while I was working, I happened upon a wonderful house in rural Riverside County adorned with plastic Christmas figurines! I was stunned and stopped to look at it in wonder.
A few days later, I ventured back to the house with camera in hand. 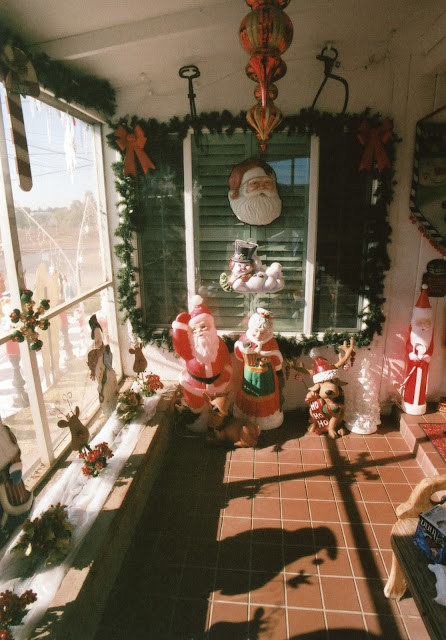 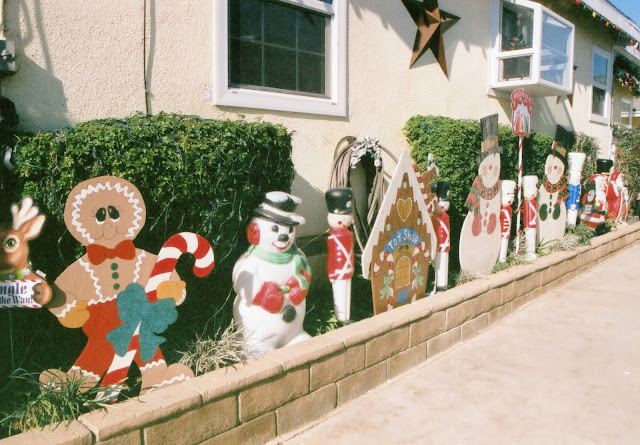 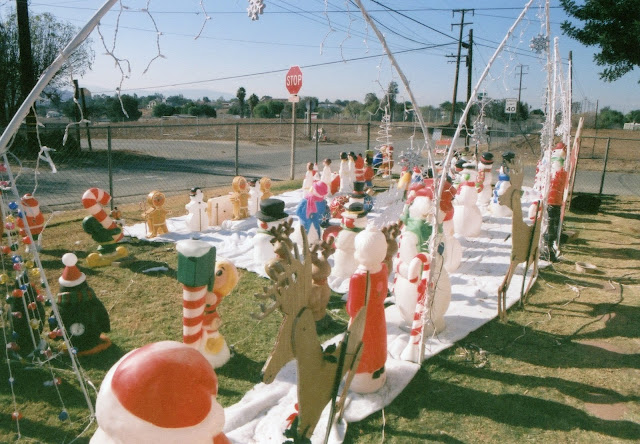 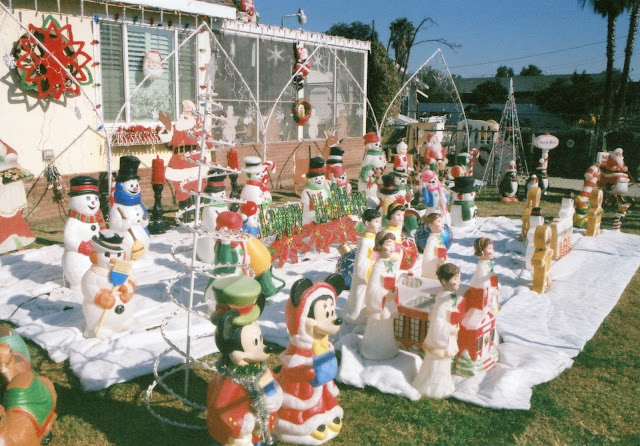 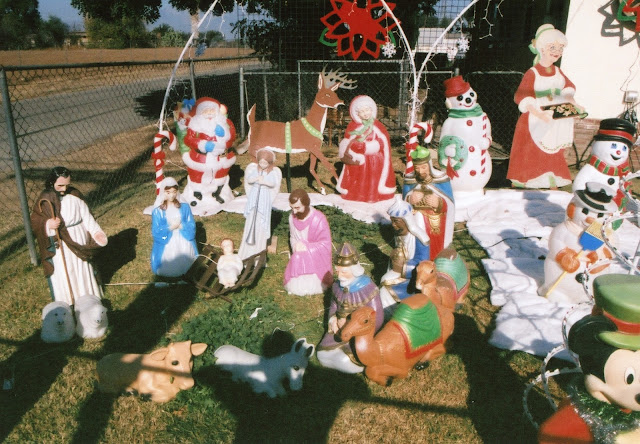 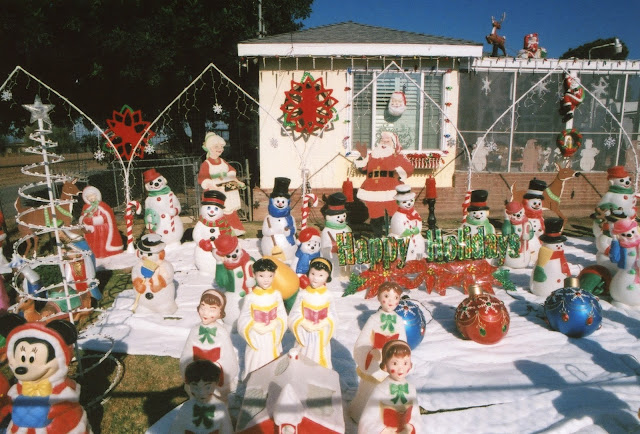 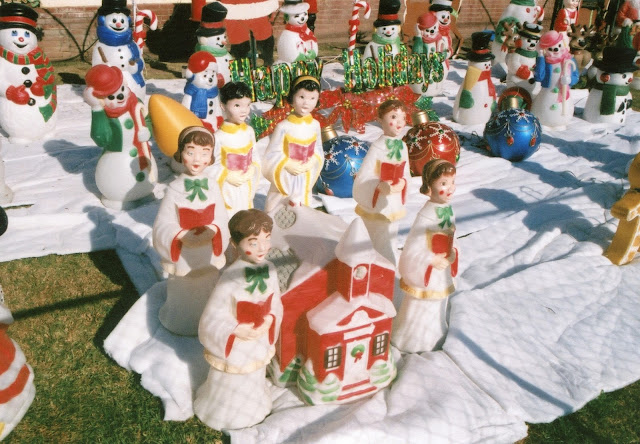 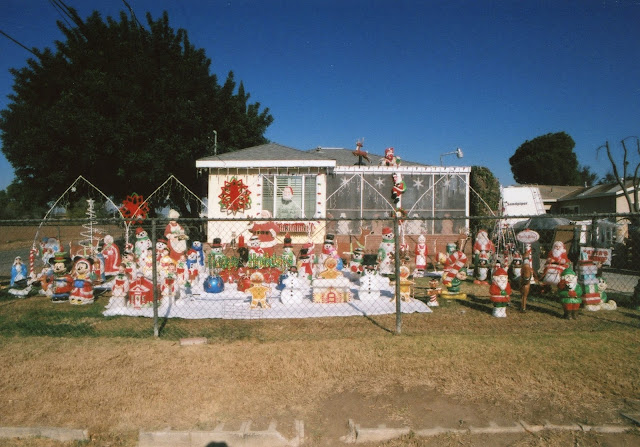 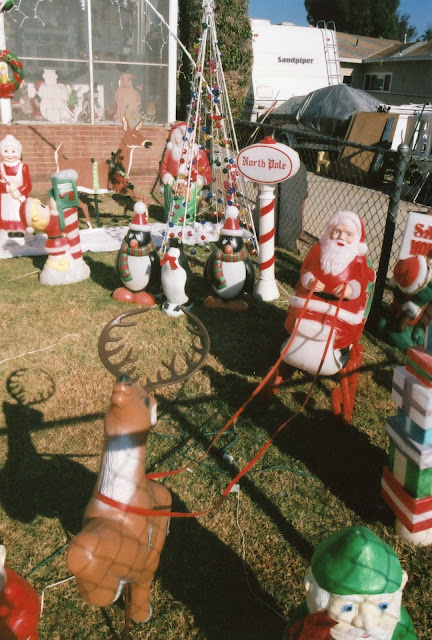 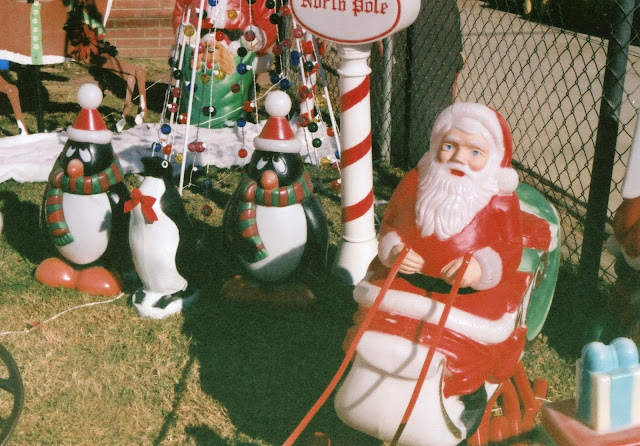 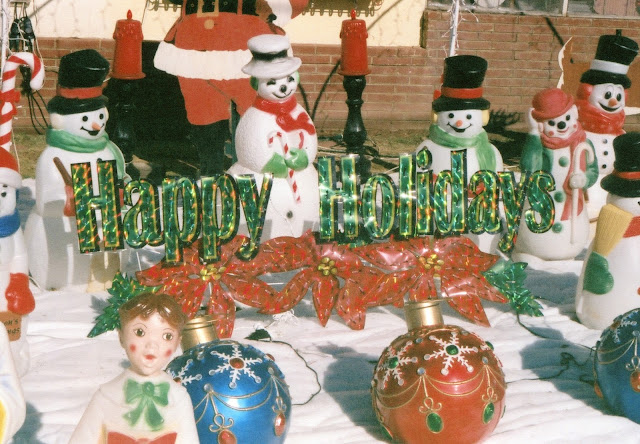 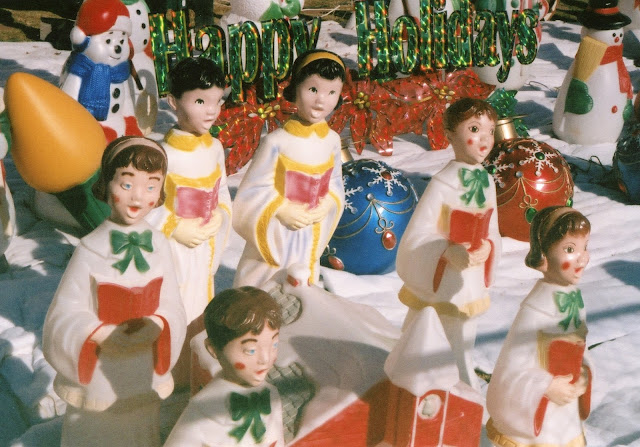 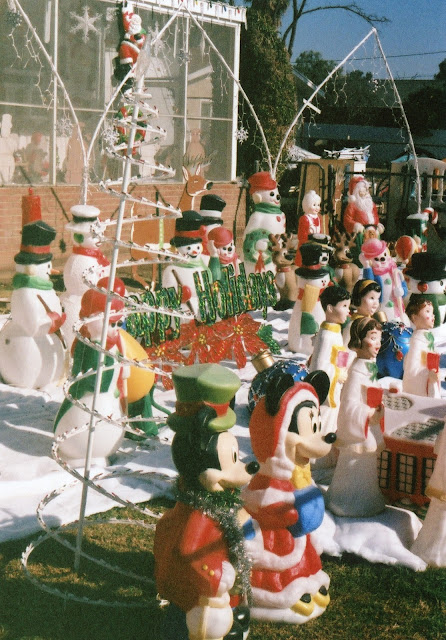 
For all it's erosive potential, the desert also often preserves things. The dry climate and the transient nature of visitors make change a slow process. Without constant expansion of the business or housing districts, there is little need to tear down the old, to make way for the new.


The site of the Barstow BNSF/Amtrack station was home to an original Harvey House that operated from 1885 until it burnt down in 1908, the current facility was built as a replacement and opened in February of 1911.

Along with train operations, the current site is home to the Barstow Route 66 Mother Road Museum and Western America Railroad Museum.

The iron First street bridge was constructed to replace a narrow foot bridge which, for years, provided the only passage over the railroad tracks.

The rail station was originally a key hub for transportation of borax and silver mined locally form Daggett and Calico.
Then became a major hub for immigrants coming to California from the east during the depression and Dust Bowl era.

The El Rancho Motel was built in 1943 with wooden railroad ties from the Tonepah and Tidewater railroad line, and is said to have once been frequented by Marilyn Monroe.


Downtown Barstow is populated by motels in various states of repair or decay, fast food restaurants (Barstow is the home of the first Del Taco restaurant), auto-repair shops and any number of sketchy people milling about...

On the outskirts of town however, is a gem.
Standing proudly against an endless horizon, is the still functioning, two screen Skyline Drive-In movie theater constructed in 1966.


There has been much written about Route 66, songs, books, movies, poems, and if you've traveled all or even part of it, it's not hard to understand why. One of the remarkable things about this legendary road is the wide variety of landscapes which is traverses. Plains, mountains, deserts, it truly provides a snapshot into America.

Recently we took a day trip up a piece of historic route 66 towards the desert community of Barstow via Victorville and Oro Grande.

Once you get beyond the suburban sprawl and out into the rarefied air of the high desert, you can feel a change come over you. The tight streets and traffic corridors give way to wide open space, open roads that disappear into the horizon and limitless skies...

And then as your mind relaxes, you come upon wonderful treasures forgotten by time and discarded by progress.

Remnants of houses, businesses, roads, all become food for your imagination. Who lived there? When was this place "new"? Where did everyone go?


When we set out on the road, we only had a sketch of where we were headed but, Elmer Long's Bottle Tree Ranch, was a "must see" on this outing. I did shoot some color this day as well, but am posting the black and white photos in an effort to entice you to make your own pilgrimage, while preserving some of the mystery of the place.

Elmer's is one of those places that when you see it, it makes perfect sense yet you could've never imagined its existence before you actually laid eyes upon it.

Elmer's is a creation of imagination and love. It is welcoming and inspiring. It is waiting, under the bright desert sun for you.


I first visited Griffith Observatory in the 1980's. I was immediately captivated by it's location, size, scope, mission, architecture, views, history, basically everything about the place struck a chord with me.

Since then I've been back more times than I can count, taken friends and family there, photographed it and it has not lost any of it's attraction for me.

Sitting high above Los Angeles/Hollywood, CA. The observatory stands, even after extensive renovation, as a monument not only to the heavens and all of their wonder, but to the city's past. The place is a full of history and rich with folklore.


Sadly, the main entrance is no longer the "main entrance", but the doors are usually unlocked during visiting hours and you can still open them for nostalgia's sake. The right 1/2 of this photo is taken from inside the building looking out the open main door.

I kind of hate spoilers, so I won't detail every special thing about this wonderful place, I'll just suggest that If you haven't ever been, go. If you haven't been in some time, make plans to go back.

In the daily grind of life, it's easy to forget that there is still mystery in the world, that things aren't always what you are told, or what they seem to be at first glance...

We traveled to a place near where I grew up, and where I spent time as a teenager. As this location is private property and not readily accessible to the public, I'll refrain from divulging it's location.

This place is full of local legend, of ghosts, of recluses, of wild dogs... And of cars, antique and decaying...

I took 3 cameras with me that day, a 1960's Olympus Pen, a 1972 Polaroid SX-70 with Impossible Project film and my trusty 1950 Tower 120 box camera. The Polaroid produced only blank images... The Olympus which I thought was loaded with 200asa color film turned out to be empty... And I seemed to have a few issues with light leaks with the Tower 120, but maybe it was more from the place, than the equipment...


Disneyland in Southern California is an iconic place, and in this iconic place, is Main Street USA. A street burned into millions of peoples memories through visits to the park, films, postcards, television shows and family photos. Walking down this street, envisioned by Walt Disney as a snapshot of Main Streets of his childhood, transports you literally and figuratively into another world. A world of fantasy, and imagination, upon which you are free to imprint your memories and experiences.

I had a day off of work last week due to inclement weather and took the opportunity to spend the day at the park.
As I walked into the park, and saw Main Street before me, I decided to shoot every building on it in succession!

Take a few minutes and enjoy a walk with me down this wonderful street...

It is no secret that Walt Disney loved trains, so the Main Street Depot is as good a place to start as any.

Disneyland's City Hall is staffed by extremely knowledgeable and helpful people, don't be afraid to stop in and ask them anything.


The Disneyland Fire Station is not only wonderful to look at, but houses upstairs Walt Disney's personal apartment, preserved just as it was when he used it.


The Carnation Cafe is home one of my favorite Disneyland treats, deep fried pickles!

The Penny Arcade was the predecessor to modern video game arcades and featured pachinko machines and slot machines. The Disneyland Penny Arcade used to house many pressed penny machines (now scattered around the park), there are still a couple of these inside, and several nickelodeon machines as well.

The Coca-Cola Refreshment corner not only houses could drinks, but also features an upright piano, which sees use at various times throughout the day. Also in this photo is the Candy Palace, where you can watch candy being made from scratch!


The Jolly Holiday Bakery and Cafe is a perfect place to have a bite to eat and enjoy some people watching. They offer several delicious sandwiches and baked treats. Mmmmm treats!

Unfortunately the Plaza Inn is a favorite place to park strollers... But, it's a lovely building just the same.


The Market House has been transformed into a Starbucks Coffee, for better or for worse...


A favorite spot of mine during the warmer months is the Main Street Cinema, where you can enjoy some air-conditioning and watch some vintage Mickey and friends cartoons.


The Disneyland Magic Shop is a favorite of kids of all ages and once counted comedian Steve Martin as an employee.


The "Livery" is actually a new gate which will offer a passthrough route parallel to Main Street through which park goers will be able to bypass the Main Street Parade.


The Disneyana Gallery now occupies the space that was formerly a fully functioning Bank of America branch, unlike typical bank branches, the Disneyland Bank of America was open all day Saturday and Sunday and offered full service, such as cashing travelers checks, taking deposits, dispensing withdrawals etc.


This wooden Indian stands in front of what was once Disneyland's smoke shop, selling cigarettes, cigars, pipe tobacco and smoking accessories.

Well, that's it. A walking trip on a cloudy day up and down Disneyland's iconic Main Street USA.

Mike
Prints of my photographs may be available for purchase, if interested, please feel free to contact me for availability and pricing. Reftribution@Gmail.com